Between his Scientology, the indelible image of that time he was jumping up and down like a lunatic on Oprah’s couch, and the weird ‘center tooth’ that once you see, you can never unsee—there are a myriad of things about him that bother me.

I can’t stand the Mission: Impossible movies, where he will fight a whole team of bad guys who eventually throw him out of a helicopter that’s somehow flying upside down. He’ll manage to fall through the whirring blades unscathed, plummet toward certain death, then suddenly catch with one finger on the face of a cliff, ending up with only a scratch on his arm and cut on his forehead. He then crawls dramatically to the top of the mountain, and upon reaching the summit, discovers a jetpack that his IMF team has planted there, anticipating the whole chain of events. He immediately straps it on and shoots off into the air to chase down the bad guys, who will all ultimately peel their faces off to reveal that they’re actually other people who were on his team at the beginning of the movie. (I don’t think that’s an actual scene, but it’s probably on the storyboard for the next sequel.) 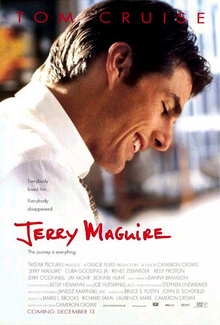 Anyway, back in the day, he played the title character in a movie called Jerry Maguire. Jerry is a middling agent for a high powered sports agency, who gets fired and still ends up representing Cuba Gooding Jr., a Cole Beasley sized #1 wide receiver for the Arizona Cardinals. They yell at each other a lot, and jackhammer the phrase “show me the money” into our collective skull until Jerry finally secures Cuba a big contract that will set him up for life, unless he starts buying Lamborghinis, cocaine and mansions, in which case he’ll be broke in three years.

Along the way Tom breaks up with Kelly Preston and falls in love with Renee Zellweger, who is the mother of the funky looking little kid from Stuart Little. They eventually break up, and everything is falling apart until forlorn Tom shows back up, wanting to reconcile. “You…(dramatic pause while he sets his jaw, presses center tooth down on his tongue, trying to get tears to form in his sullen eyes)…complete me,” he emotes, the music swells and women all over America get real tears in their eyes, while husbands are rolling theirs.

It made a lot of money, and somehow got nominated for Best Picture, in what must’ve been a down year. If it were made today, it would be on the Hallmark Channel, where it’s always Christmas, and feature those same former child stars that are in every single one of those Hallmark movies. And don’t get me started on the fact that Cuba Gooding Jr. somehow won the best supporting actor Oscar that year over Edward Norton in Primal Fear. (Insert eye roll emoji.)

Anyway, as you can tell, the movie, and particularly that phrase bugs me. Mainly ‘cause i don’t like things that aren’t true.

Look, i adore my wife—she is a wonderful, God-fearing, hard working, beautiful woman and i can’t imagine my life without her. I look back at the sometimes painful decisions that i believe God led both of us to make before we met, and i know He alone orchestrated some pretty crazy circumstances to put us together.

Complement each other? Yes. (No…not like telling her that her hair looks nice. Although i do tell her that sometimes.) Our strengths balance the other’s weaknesses and vice-versa. She does a lot of things around the house, and enjoys taking care of our property and i…go to work and…play the guitar. (Maybe i should do the other kind of complement a lot more often.)

It’s not some stupid movie’s fault, but i think a lot of the time people go into relationships with that mindset—if i find the right person, my life is gonna be whole…that this guy/girl is the missing piece to my 1000 piece puzzle and everything will be great once i find him or her.

It doesn’t work that way. If you’re looking for another person to fix your mess, and make everything rosy, you’re going to be perpetually disappointed. There’s not a human being alive that can be the knight in shining armor, or the 24/7 beauty queen that our minds say is out there waiting for us. That’s too much pressure, and relationships crumble every day under the weight of unmet expectations because of it.

As believers, we need to find our identity in Christ and Christ alone. God tells us that we are His children, and that it is in Him we find our security, that “we are his workmanship, created in Christ Jesus for good works, which God prepared beforehand, that we should walk in them.” (Ephesians 2:10)

That says nothing about finding a soulmate, or putting some of your trust in another person to make you be the man or woman God created you to be.

Jesus completes me. I shouldn’t expect you to.

The Apostle Paul, in his letter to the Philippians, says this “I am sure of this, that he who began a good work in you will bring it to completion at the day of Jesus Christ” (Philippians 1:6)

Single ladies, single guys…don’t miss this. You’re always going to be disappointed if you put your faith in another person to be your story arc. Life is far too complicated, and we all carry too much sin and baggage into relationships to be ‘enough’ for someone else. Christ alone is enough, and once you put your faith in him, your life’s journey should be about him and his will for your life.

He will put other people in your path to spur you on toward love and good deeds, but you can’t make them the focal point, or try to find your true happiness in the creation, instead of the creator and expect it to be something that lasts.

Those of us in relationships should always try to do the best we can, but we should also know we’re going to fall short.

And continually point each other to the one who won’t.