When Gospel for Asia moved their headquarters to Wills Point, Stonepoint had a large influx of new people who were checking out churches in the area. One of those people was Bob Mayo. 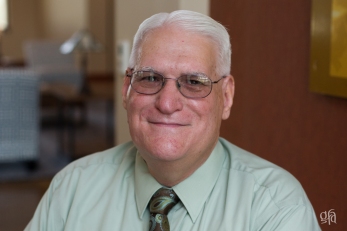 Bob was a tall, shy man at the ‘north end’ of the demographic of people who were attracted to Stonepoint. He didn’t like crowds, and actually stayed in his car without coming in the building for a couple of weeks before he built up his resolve to come inside and check it out. He had served at GFA for years, was a widower, and really sort of searching for the ‘next thing’ that God would have him do in life.

After finally coming inside the building, a few weeks passed and Brian Tate noticed him taking meticulous notes during the messages, and asked him if he’d be interested in writing some posts for our little-known Stonepoint Blog. Bob reluctantly agreed and started translating those notes into ‘what i got from today’s message’ posts that started appearing on the blog in January of 2015.

I don’t think he really knew what ‘blogging’ was when he first started. His first posts were pretty short, and littered with attempts at being ‘folksy.’ Those posts eventually morphed into stories about being a ‘yankee’ in Texas, tales from history, some personal things mixed in with stories about hobbits, donkeys and whatever else struck him to write about. He wrote candidly about his struggles with his prayer life, despite being in ministry full-time. As we gerrymandered our staff responsibilities, i inherited the blog editing, and every couple of weeks, Bob would e-mail me, always with the same disclaimer:

Pastor Mark, (refusing to just call me Mark like i asked him to)

I don’t know if you’ll want to use it or not, but the Lord laid it on my heart, so here it is.

I always used them.

Bob wrote in kind of a ‘stream of consciousness’ style, and after i broke up his Andre the Giant sized paragraphs into something a little more readable and added a few commas here and there (the man was not a fan of punctuation!) i’d post them.

He loved to underline things. If you read the blog with any regularity, you’ll note that hyperlinks (links to websites) are the only thing we underline. Underlining is a throwback to the bygone typewriter era, like two spaces after a period that we just don’t use anymore. I’d spend 15 minutes replacing the underlined things with italics and bold text, to emphasize his points, polish a couple of spots and hit publish. Like over 150 times the last two years. The man was prolific— the Stephen King of blogging, without the blood, the foul language and everything being set in Maine.

(I, on the other hand, sit in my robe at the MacBook at 3 in the morning, sipping Maalox, debating on whether to use ‘and’ or ‘or’ in a sentence like my conjunctions are gonna cause worldwide mayhem if i make the wrong decision.)

He joined the church, and despite his shyness, got involved in a Journey Group and served faithfully as a greeter on Sundays. He started attending our re:generation ministry on Monday nights and eventually became one of the leaders in that ministry here at Stonepoint.

Bob went to be with the Lord, suddenly on December 18th.

As i said earlier, he’d been looking for the ‘next thing’ the Lord wanted him to do and i think he found it that Monday night.

In the book of Genesis, when they’re going through the genealogy section in Chapter 5, there’s a brief mention of a man named Enoch, starting in verse 21.

I like to think that’s what we can say about Bob. Despite his admitted struggles with his prayer life, maybe Bob Mayo walked with God, and he was not, for God took him.

We see God through a glass, darkly. We talk to Him, surrounded by the distractions of this world…the noise, the static that hampers our listening of His responses to us.

At some point, maybe our heavenly Father said, ‘Bob, we talk so much, yet you say it’s difficult for you. Why don’t we lose this less than perfect form of communication we’ve been using all these years, and just do this in person?’

What more can you ask for? Bob’s reunited with his beloved wife, Alice, and talking face to face with his Creator.

How’s that for a ‘next thing?’

For all of Bob’s blog posts, you can follow this link: https://stonepointwordpress.com/?s=Bob+Mayo&submit=Search

1 thought on “The Next Thing”