When i was a kid, i loved maps.

I remember being 5 or so, just able to read, laying in the living room floor in our little house in Oak Cliff, with the entire city of Dallas unfolded before me, in full color glory. My parents gave me some felt-tipped pens and i would color on them, fascinated by parks and golf courses and divided roadways with grass in the middle, as opposed to the boring old street we lived on. 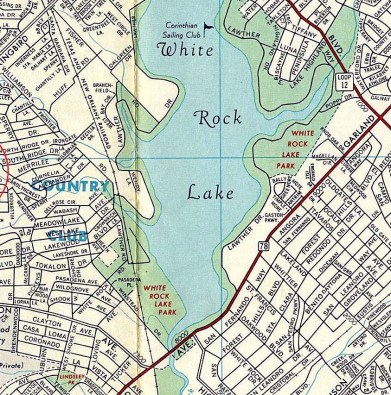 My dad also had a Mapsco, which was a little, wire-bound, gridded book with an even closer view of everything in the city, but he didn’t let me mess with that one. It cost more money, and he used in in his job.

All this study came in handy a year or so later, when we moved to Northeast Dallas, where the streets don’t follow a grid of any sort, because of the lake, and my mother was always getting us lost coming back home from the discount store or somewhere in Mesquite, where the roads have no rhyme or reason. (“Mom, Gus Thomasson just turned…we’re on Maylee Blvd. now!!”)

Now that 95% of us carry around a smartphone with GPS, nobody really uses printed maps anymore—heck, most kids these days would probably have a hard time figuring out how to refold one. I still like looking at the ones in the glass case at rest stops (You are HERE) marveling at how many hours we’ve driven and how little of Texas we’ve covered in that time.

Most of us, when going somewhere we’ve never gone before, or are not sure of, pull out our phone and figure out the best way, check where the traffic is, or even get turn-by-turn navigation from Siri, or whoever is the assistant for people with other phones.

How ridiculous would it be to figure out the best route and then choose to go another direction?

But that’s exactly what we do in life.

God has given us a roadmap, but for some reason, we think we know how to get from Point A to Point B without it. What is intended to be a straight path takes crazy detours because of our stubbornness and rebellion and refusal to consult the paper laid out before us, in this case, The Bible.

For example, Proverbs 5 warns us about the adulteress:

And now, O sons, listen to me,

and do not depart from the words of my mouth.

Keep your way far from her,

and do not go near the door of her house

…and so what do we do? We walk down the street of temptation, and when nothing bad happens, cross over to the other side, even closer to where we are warned not to go. And when nothing too bad happens there, we decide the porch looks inviting, then peek inside the front door…and before we know it, are in the middle of a mess we can’t get out of and were warned about in the map we’ve been given.

Everyone has done it. We all sin and fall short of the glory of God. But what we sometimes don’t realize is that God provides us with an ‘out’ in every temptation.

1 Corinthians 10:13 says ‘No temptation has overtaken you that is not common to man. God is faithful, and he will not let you be tempted beyond your ability, but with the temptation he will also provide the way of escape, that you may be able to endure it.’

Next time you’re tempted with your favorite ‘sin-issue,’ something is going to happen where you have a few seconds of clarity, where the Holy Spirit will say ‘you shouldn’t be doing this’ and you will have an opportunity to steer clear of the temptation, pray, and ask God for help in not giving in to the sin.

So there’s your means of escape. At that point, you have to decide if you’re going to follow the map or not.