For several years of my life, I lived on an Air Force base in Bossier City, Louisiana. We arrived there when I was eight years old and now I was in Junior High School (7-9 grade). I was probably about 13 years old and was not a good student. I would spend most of my time in class day dreaming. I remember one day, just as clear as if it had just happened, that I was looking at this big geography book. It was the size of a “coffee table” book, if you remember those and had black and white pictures of various sites from around the world. I remember turning a page on this day, and there stood a full-page picture of the Taj Mahal. Having already been to Asia earlier in my life, anything Asian attracted my attention. I remember thinking, “boy, I’d like to see that someday.” I don’t recall ever having any thought of that event until I was actually in India in 1993, some 30 years later. 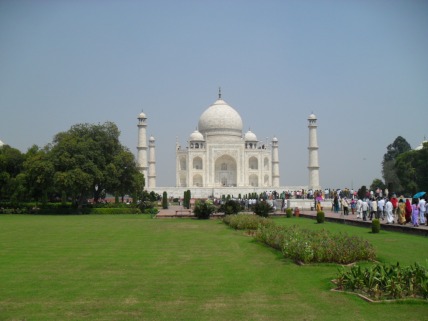 For some reason, this thought came back to me this morning (Aug 31st) as I was getting ready for work. I thought to myself,“God really did something really cool in my life with that trip.” I’d like to share a little of that with you today.

Just for a little background, my wife and I had been supporting Missionaries through GFA, where I currently work, for about three years. 1993 and 1994 were kind of pivotal years in our life for many reasons. It started when I started to take God more seriously in my life and was becoming uncomfortable with my life as it was. Through another strange work of the Lord in May of 1993, I received an invitation from GFA to go to India and tour the work for two weeks in November. When I opened the invitation, I had was immediately struck with a strong impression that I was supposed to go on this trip. I really did not expect my wife to be in favor of it, but when I told her about it, she said, “if you really believe God wants you to go, then you need to go.” I don’t have time to go into it, but that really surprised me and there is another story about her making that statement! So, from May to November I worked toward getting ready for the trip. It was six months of much struggle and spiritual battle for us. About everything that could happen to make me change my mind, happened. I finally told my wife that I was not going to go. Her response was, “oh yes you are! Don’t let these problems change your plans.” Again, I was shocked by her response. So, I kept at it and finally the day arrived.

I boarded an airplane in Denver and headed for Dallas. At the airport, I met up with the rest of the tour group and some GFA staff who were also going. We boarded a plane for Germany and then transferred to another plane to Delhi, India. After a little rest, the brothers on the field loaded us in a bus and took us to another state to visit India’s most famous tourist site. I still had no thought of that day back in junior high school. We arrived at the Taj and filed off the bus. As we approached the complex we walked through a gate that was cut through the wall around the Taj. It was then I looked up and there standing before my eyes was the Taj Mahal! I immediately was brought back to that day in junior high school. I didn’t hear God’s voice, but in my spirit, it was as if God spoke to me and said, “See, you wanted to come here, so I brought you. I was with you even when you had little or no thought of Me!” I don’t know if I gasped or said something, but the person next to me asked me what was wrong. I told him about that day in school. We had a really nice tour of the Taj, but I was so intrigued about what had just happened to me that I don’t remember much of what our guide talked about. At the time, this was the strangest encounter I had ever had with God! I don’t remember if I even thanked Him for actually bringing me there. I think I did, but it was something I have never forgotten.

Why do I tell you this? I know for myself, I don’t always appreciate the things God has done in my life. This was just one “God thing” in my life during the years of 1993-1996 until we finally came down here on staff. I haven’t talked of these “God things” often because of fear that it may sound like I’m bragging about or embellishing things. That’s not the case. God did so many amazing things, some small, some big, to get me and my wife down here to serve at GFA. He has done even more to keep me here.

So, here is my takeaway. Make yourself think about things that God has done in your life. As I was writing this I asked myself why God doesn’t do such things in my life any more. Then I realized, He has! Some of them are so minuscule that unless you are aware that God is in and with us, that we will miss it all together. I can think of days sitting here at my computer in the office and having just a terrible day. My mind and heart would be just dark and black when someone came up to my desk just to say hi. Many times, the person would give me a hug and say, “I love you Uncle Bob.” (That’s my nickname here, by the way.)There are still hard times, but if we don’t rebel, God can turn our struggles into praise and thanksgiving in a millisecond. God desires our praises. Let’s try to remember to thank and praise Him even when we don’t feel like it. Who knows, maybe you will end up at the Taj!!